A Detailed Look Into Singapore Math 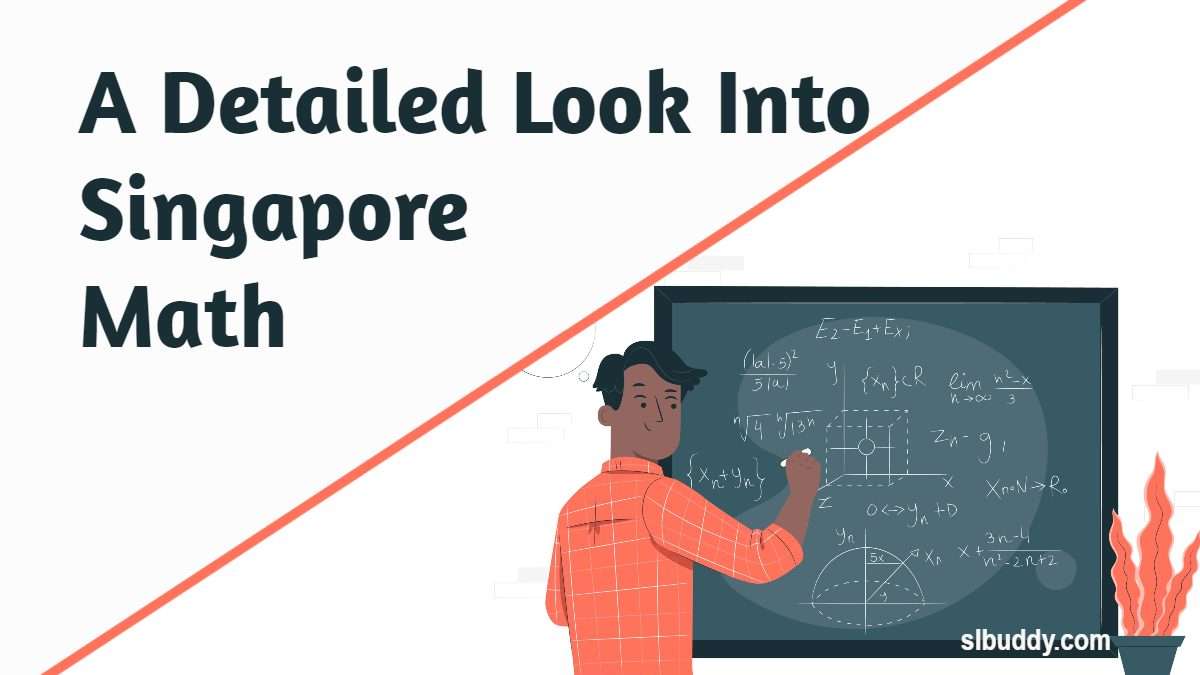 In many American classrooms and homeschool settings, the Singapore Arithmetic technique signified a shift in how math was taught. The program follows a three-step learning strategy, starting with the concrete (showing something using manipulatives) and progressing to the pictorial (making a visual representation on paper) and finally to the abstract (solving problems).

Singapore Math closely resembles the Common Core State Standards Initiative, which may or may not be a good thing depending on your perspective on Common Core. With Singapore Math, children can grow without having to do unneeded busywork, which is fantastic for many students but might be perplexing for those who join the curriculum later due to a move or a change in schools.

What Is Singapore Math, and How Does It Work?

It is the concept that distinguishes Singapore Math from other methods, not the material. Rather than rote memorization, the Singapore Arithmetic framework is built around the idea that problem-solving and developing mathematical thinking are the keys to success in math.

Students will have nothing to depend on when it comes to increasingly difficult math learning if they don’t have a strong foundation.

This isn’t to say that what is taught to young pupils are simple or require only basic abilities. Rather, it is believed that while teaching a concept or a talent, it is necessary to devote as much time as necessary to ensure that students acquire the skill.

The student will not be moving on to the next concept under the impression that earlier skills may always be retaught if necessary. Instead, teachers can simply revisit the material, freeing up more classroom time.

The technique employs a three-step learning strategy that teaches topics in a systematic manner. It progresses from the concrete to the pictorial and eventually to the abstract. Students not only learn how to do things, but also why they work.

What is known as Singapore Math in other nations is simply math in Singapore. The Primary Mathematics Series, which was designed under the direction of the Singaporean Minister of Education, was first launched in 1982.

Jeff and Dawn Thomas discovered in 1998 that the Singapore math program they had brought back to complement their own child’s homework could be useful to schools and homeschoolers across the country.

As the program grew in popularity, the pair formed Singaporemath.com Inc. and began marketing their books as Singapore Math, a recognized brand.

Singapore Math first gained popularity in the United States among homeschoolers and tiny private institutions and increasingly spread to many private and charter schools. Singapore consistently ranks first in the Trends in International Mathematics and Science Study (TIMSS), which identifies Singapore’s fourth- and eighth-graders as the world’s best math performers. Singapore is still the best-performing country according to the 2019 TIMSS.

With so much interest in the method, Houghton-Mifflin Harcourt, a renowned educational publisher in the United States, teamed up with the top academic publisher in Singapore to print and distribute “Math in Focus: The Singapore Approach” in 2007.

This series, together with Thomas’ “Dimensions Math” and “Primary Mathematics,” are the most popular curriculum packages for teaching the Singapore math approach available to educators and parents in the United States.

A textbook, workbook, and teacher’s or home instructor’s guides are included in the Singapore curriculum. The textbooks introduce new concepts, while the workbooks provide practice in order to cement them, and the guides offer lesson plans and directions for using the books.

“Today we’re going to study about long division,” a typical third-grade math lesson could say. While the teacher displays the procedures and actions required to solve a long division issue, the students observe.

The way Singapore math is taught is different. Students are tasked with grasping the theory from the start, rather than viewing a presentation of a new math subject and then performing identical problems to reinforce the idea.

“I have some pennies I want to put in some jars,” a parent or instructor would say in the long division scenario. Following that, the instructor places penny baggies and jars on the table. “I have 17 cents that I want to split evenly between five jars,” they explain.

Students must first find out how it might work, then explain their thoughts on what it means to share equally and how they handled the topic. When they’re done splitting the 17 cents between five jars they will find that they have a remainder of 2 pennies.

Pros and Cons of Singapore Math

The concentration on problem-solving skills in Singapore Math is in line with and in fact, exceeds the Common Core State Standards.

While some individuals consider this as a positive, others see it as a negative.

Some people believe if a child is learning Common Core Standards that Singapore Math enrichment could be confusing for children to learn and that it excessively advanced in terms of teaching mathematical ideas to young children.

01. Instead of mindless memorizing of rules and formulae, Singapore Math asks pupils to create meaning in order to master concepts and abilities.

02. It is in accordance with the Common Core State Standards Initiative.

03. It teaches fewer topics in a year, but in greater depth, ensuring that students have a solid foundation upon which to build without having to relearn concepts.

04. The visuals in textbooks and workbooks are clean and straightforward, making them easy to read.

05. Textbooks are sequential, building on previously learned concepts and skills, allowing students to learn faster without putting in the extra effort.

06. Workbooks are generally self-explanatory, making it easy for students to work independently.

07. Prepares children for pre-Algebra and Algebra in middle school and is appealing to many advanced students.

08. Suitable for different types of learners and demonstrated to be effective for students with learning disabilities such as dyslexia.

Despite the many advantages of Singapore Math, including data demonstrating that it is superior to standard American textbooks, some schools find it difficult to apply.

01. It adheres to the Common Core State Standards (CCSS) (yes, this can be a pro and a con, depending on whom you ask).

02. It’s possible that it won’t work for a mobile student population. When the math curricula are similar, many children relocate between school districts, which isn’t a major deal. However, because Singapore Math is sequential and advanced, it is more difficult for a student to start the curriculum towards the end of their elementary years.

03. It is less focused on applied mathematics than standard math textbooks in the United States.

04. Everyday Mathematics, for example, a curriculum designed by the University of Chicago and released around the same time as Singapore Arithmetic, focuses more on data analysis utilizing real-life, multi-step math problems.

05. It necessitates considerable and ongoing teacher training, which is not always viable for homeschooled children and is neither financially nor practically practicable in some school systems.

06. Consumable supplies such as workbooks must be reordered for every classroom every year, putting costly pressure on already stretched school finances and homeschoolers alike.

07. The upper elementary levels of 4th and 5th and the middle school Singapore Math curriculum can be very advanced for some learners and may be difficult to teach for untrained teachers in this curriculum.

What methods do you use to teach Singapore Math?

The Concrete, Pictorial, Abstract (CPA) approach to teaching Singapore Math help pupils grasp math by building on prior knowledge. In the concrete phase, students will be encouraged to solve problems by interacting with tangible items. You will assist pupils in conceptually connecting their objects and visual depiction in the pictorial step. You will instruct kids on how to use numbers and math symbols throughout the abstract phase.

The approach of Singapore Math differs from that of other math curricula. Singapore Math teaches pupils how to think mathematically so that they may rely on theory and build on topics rather than rote memorization and pounding concepts through comparable problems. Singapore Math students also develop great mental math skills.

How can I assist my child in learning Singapore Math?

Keep in mind that Singapore Math employs a sequential learning approach that includes assisting students in comprehending the concrete, visual, and abstract. If you’re a teacher, make use of the teacher’s guides, which include lesson plans and instructions. You might find online forums like Singapore Math’s Facebook page beneficial if you’re homeschooling or supporting a child who attends public or private school from home.

How do I know which level of Singapore Math to begin with?

What grades are covered by Singapore Math?

Singapore Math is designed for kids in grades Pre-K through 8.

After Singapore Math, what’s next?

Students can graduate to practically any math program following Singapore Math since it provides fundamental mathematical thinking abilities. Generally, students are ready for pre-Algebra and Algebra by the time they are in middle school.

Where can my child learn Singapore Math?