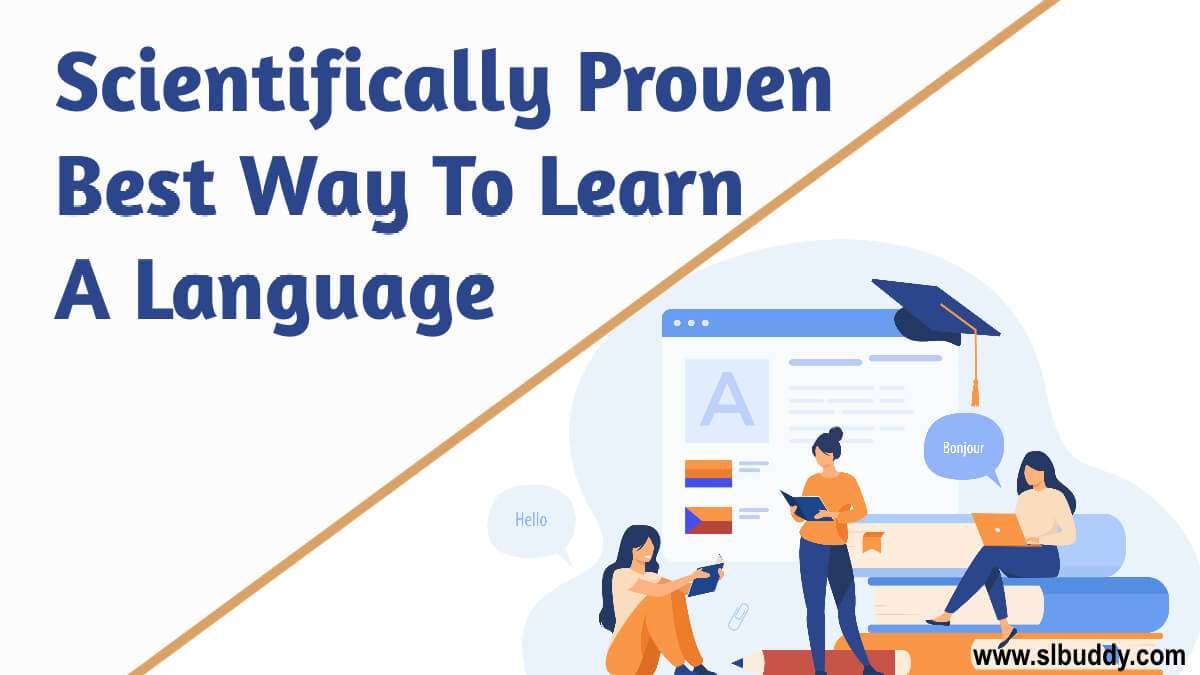 We’ve all attempted to learn a new language using various ways in our lives. Some students have attempted to remember words and concentrate on grammar. Others missed the grammar class and instead relied on listening and reading to learn.

Some people have even devised novel ways to study a language via Netflix! We’ll teach you how to learn a language the best way possible (Backed by Science).

You’ll discover language learning tactics, information on how to study a language on your own, suggestions on improving listening comprehension, boosting fluency, and anything else you need to learn a language rapidly at home.

Way To Learn A Language

Adults who were able to effectively learn a new language had reinforced neural networks, which improved their general brain function and slowed the rate of deterioration. These findings were published in 2014 by researchers at Penn State.

We looked through some recent studies to find advice on becoming fluent in a second language in your leisure time.

Communicate From Day One

What is the quickest approach to acquiring new vocabulary in a foreign language? There are as many methods for learning vocabulary as there are proficient language students.

The most significant discussion is often over which method is the best for science. Should we use flashcards to memorize words? Or should we naturally acquire them by reading and listening?

In actuality, they are both somewhat correct. Both strategies are advantageous for various reasons, and if you can find a balance between them, you will be successful.

What is the most effective technique to study a language independently or online? We cannot all go overseas unless we are proficient in the language. Home immersion is one method for doing this.

At home, it is feasible to build an immersive atmosphere. It just requires some work and perseverance. For example, you may immerse yourself at home via social media. You may also utilize social media to locate chat groups.

Changing the language on your phone or viewing programs in your target language can also help you attain immersion. Moreover, you will need as much experience in speaking and writing as possible.

Practice your language before sleep and during sleep

The participants in the research were German speakers who were asked to review Dutch terminology shortly before going to bed.

One of the groups had language cassettes played for them while they were non-REM sleeping, and those tapes included the Dutch phrases from previously. The other group did not participate.

After being awakened, the participants in the study group who had listened to the cassettes fared significantly better on vocabulary tests.

In a study that took place in 2012, two researchers fabricated a language called “Vimmi” and had 20 participants try to learn it. They divided the content in half and taught part of the words using gestures, while other words were taught without gestures.

The students retained more of the vocabulary via gestures, including more abstract concepts like theories and adverbs.

The researchers said that gestures could “reinforce the sensorimotor representation of a word or sentence, making it resistant to degradation.” Or, as we like to say it, two fingers up.

You may be mistaken if you are studying and just reviewing a language. There may be a better, faster approach to learning a language than going over the information multiple times to remember it.

The premise behind test-enhanced learning is that recalling ideas or facts from memory improves long-term retention of such concepts or facts. “hundreds of studies” refers to research that shows that testing learned content enhances retention over restudying or doing nothing.

Instead of restudying or no therapy, testing learned knowledge has improved learning and recall of new information in recent studies.” Learn and test yourself instead of repeatedly studying, reviewing, and repeating the same stuff.

Testing makes retrieval easier. As a result, conducting examinations to acquire linguistic vocabulary is the most effective method.

Lend a hand with your memories

Systematically scheduled attention to anything you want to memorize dramatically increases the brain’s likelihood of memorizing the information.

According to the notion, frequent exposure over time is preferable to a concentrated exposure period.

If you are learning a language, begin recording new terms as you encounter them. Include a translation in your language on the reverse of the cards. Then, devote daily time to practice.

Start by seeing the term in your target language and attempting to recall its translation in your native tongue. If it cannot be obtained, place it towards the top of the stack.

When you get it, place it at the bottom of the pile. Soon, you will be exposed to those difficult words far more often, while the simpler terms will appear less frequently.

Next, examine the reverse side of the cards and attempt to recall the term in your target language. This might be a difficult chore when you’re prepared, but it’s well worth the effort. The use of imagery or mnemonics is another method that has been proved effective.

You may conceptualize the word as a picture (typically a humorous one or one that elicits an emotional reaction). This image is remembered each time you need to recollect the word. You will eventually recall it without the visual.

The human mind is pretty well-adapted to absorb massive volumes of confusing information simultaneously. Having a radio or any other sort of spoken word program on at all times in the home or workplace is a tried and true method for improving one’s language skills.

There is no need to concentrate or ‘listen’ to what is said since your brain will automatically recognize the words and voice patterns.

Compared to not being exposed to these stimuli, doing so for days, weeks, or months may have a major influence on all elements of language development. This is remarkably similar to how brute-force attacks on password-protected computers work.

An automated software attempts every possible password until one is successful. This strategy consists mostly of force-feeding information to the brain until it is forced to make sense of the information gradually.

Combined with more conventional learning approaches, this may accelerate and shorten the learning curve.

Practice speaking, even if it’s at a low level

We won’t go into explanatory detail here, but suffice to say that evidence supports the idea that individuals who begin learning their target language early on have a better chance of succeeding.

Even at the most basic levels, you should be able to communicate in your chosen language. According to scientific evidence, there may also be motivational variables at play.

According to research conducted in Germany, learners at the basic level who exercised their spoken German improved more than those who were just given grammatical and vocabulary assignments to complete independently.

One of the results was that motivation may have been the most important factor. In contrast to those who just studied the theory, utilizing the language to interact and communicate with others may have made it come alive for the learner, giving them more fuel to the fire to learn more.

Who better than MIT to inform the rest of the world that we need to relax a little bit? In 2014, two different groups of individuals were given vocabulary words from a different language and instructed to study the terms.

One set of students practiced their vocabulary by pressing a button whenever they understood a new term. However, the other group did not get a button and instead had the instruction written down for them to color on paper (as an idle activity).

In other words, you shouldn’t allow anything to stop you from studying the language you want to learn.

Small stages of concentrated inquiry are the key to solving this problem, which, although apparent, remains one of the most excellent methods to learn a new language.

Take some time every day to write down a phrase in your target language that you would want to learn.

Examine each word/section in a dictionary and compose the statement independently. When you meet with your language partner, have them double-check your sentences.

This is an excellent method for keeping oneself in control. Setting short, daily language-learning objectives can keep you going forward!

Having a radio or any other sort of spoken word program on at all times in the home or workplace is a tried and true method for improving one’s language skills.

There is no need to concentrate or ‘listen’ to what is said since your brain will automatically recognize the words and voice patterns.

Compared to not being exposed to these stimuli, doing so for days, weeks, or months may have a major influence on all elements of language development.

This is remarkably similar to how brute-force attacks on password-protected computers work. An automated software attempts every possible password until one is successful.

This strategy consists mostly of force-feeding information to the brain until it is forced to make sense of the information slowly.

Combined with more conventional learning approaches, this may significantly accelerate and shorten the learning curve.s

How Long Will It Take, How Fluent Will You Be?

People nearly usually underestimate the time and effort required to acquire a language and typically overestimate the level of fluency they will attain.

Some of these imaginations are beneficial; motivation is a crucial component of learning. But we don’t want to become deluded.

Many students’ overly ambitious intentions might lead to ultimate disappointment when things don’t go as anticipated, followed by abandonment of the whole undertaking. Don’t fall into these snares; they’ll leave you dissatisfied.

Several friends with lofty ambitions immerse themselves in a language but then quit after failing to achieve their goals promptly.

Frequently, this occurs with many languages or even the same language. There are, fortunately, other methods to dream and organize your language study.

An Effective Way to Improve Recall Of Memory

When we’re studying a language independently, we tend to enjoy books, music, and conversations in our target language and avoid the horrors of school, such as exams. But there is real value in testing that we can exploit and do it painlessly.

Research published in Science revealed that repeatable experiments (being pushed to come up with a word to put in a blank) increased long-term retention by more than 150 percent.

But on the other hand, the study demonstrates that there is no advantage to studying content after it has been learned and retained. Therefore, the actual process of being required to fill in the blank after already knowing something is the key ingredient for guaranteeing that the vocab word or other information is retained.

This demonstrates that memory depends not just on repeat – seeing and hearing the Spanish word in various circumstances. It is preferable to be compelled to recall information from the back of your mind.

Students who participated in the research (learning Swahili vocabulary items) did not seem to comprehend how beneficial testing was.

They expected the same outcomes for themself regardless of whether they would be receiving magical testing advantages. People use self-testing procedures seldom, and if they do, they do it to gauge their progress instead of as a learning tool.

Your parents used to give you frequent input on pronouncing each word when you were a newborn.

As a result, you picked up your mother language at home without realizing it. It has now been scientifically demonstrated that even adults may profit immensely from correcting their errors based on feedback.

Many following studies have verified that feedback is an essential component in teaching our brain to hear new sounds and that once we can hear new sounds, we naturally begin to create them more precisely.

This form of ear training will help you improve your listening comprehension, memory, and pronunciation in only a few hours.